Philippa and Paul had another Open Garden Day, though this time the weather was much too pleasant to persuade visitors from enjoying a day by the sea on what was the hottest day of the year (so far). They had 60 keen gardeners braving the heat. No doubt those that had returned after the previous occasion noticed the absence of two highly efficient Northern Officials. Family duties had prevented our helping out on this occasion.

The Rothwells returned from Tunisia on the 15th July, looking bronzed, rested and pleased with themselves. I picked them up at East Midlands Airport and we treated them to a family BBQ on our return to Harborough. Sue and I took great pleasure in listening to their experiences and we punctuated the conversations with many references to how hot it had been here while they were away and how often we had used the pool.

During that week Sue and I went to the Harborough Theatre to watch the film ‘Lincoln’. Would have been judged excellent by an American audience, but this Brit’ gauged it well acted, beautifully filmed, accurate in its portrayal of the times and characters but far too long. Sue fell asleep after half an hour, courageously roused herself after 15 mins, gave it another 20 minutes or so and went back to the ‘Land of Nod’. I would have joined her but I was keen to see the shooting (and it wasn’t shown). In contrast, a couple of weeks later we saw ‘The Impossible’. A true story based on a family caught up in the Tsunami while on holiday in Thailand. We both thoroughly recommend it. Truly an amazing story filmed in an amazing country.

Sarah returned home on the 22nd July. I drove down to Stansted to meet an 11.30pm flight. The weather forecast for the journey was horrendous, but luck was with me on the way there and it was uneventful. Her plane landed as I entered the Arrivals Hall and not too long after I met Sarah and Chloe as they exited Immigration. As I fired the car up for the return journey the first drops of rain hit the windscreen. As I joined the M11 the first flashes of lightning lit the sky. It flashed, banged and hammered it down all the way back to Harborough. I diverted to Medbourne to drop Chloe off and was all to glad to put my head on a pillow half an hour later.

The following day Sue and I attended the funeral of Bob Cook. He and his wife built our house and had been good neighbours in the bungalow next door (which they also built) for quite a few years, before moving to the Southern Estate. He was a lovely man. We would often share a can of beer and chat in one or t’others garden and chat about this and that. The chapel was packed, even had a few Traveller families attend to pay their respects. It was a nice touch when the hearse was preceded by a low-loader carrying the digger that he used to drive.

I had intended to surprise Sue the following morning by whisking her away to a hotel in celebration of our wedding anniversary. I am reliably informed it is 37 years now and still counting. However, I had to come clean a couple of days before when it dawned on me that the birthday treat we had booked for Charlotte and Ellis to see a performance of ‘Milkshake’ in Kettering, also coincided with this date (Sue had offered to look after Lucas). Charlotte hastily arranged for a friend to look after Lucas and plans were back on track. Ellis loved the performance of his favourite TV show.

That morning Sue and I travelled to the Bosworth Hall Hotel in Market Bosworth (we have stayed there previously). I had planned a walk that day. The morning was warm and going was pleasant. We stopped for lunch at the Horse and Jockey in Congerstone. The afternoon was hot and quite muggy and Sue found it a bit hard going at times, though she managed to make it back to the hotel and quaff a whole pitcher of Pimms to herself followed by a large glass of strawberries and ice-cream. I made do with a glass of cider (or two). That evening we had an excellent meal in the hotel and retired to bed after a few more drinks in the bar and a cooling walk around the grounds. 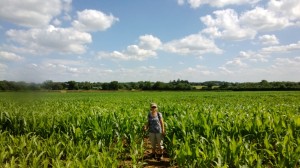 After a very large breakfast we set off on another (shorter) walk I had planned. We returned back to the hotel by lunchtime and after stopping off at the Dog and Hedgehog in Dadlington for drinks we returned home.

The following Saturday saw Sue and I on another walk, this time with the Council walking group. The start was at a local venue, the Coach and Horses in Lubenham. It was yet another hot day, but the route was a gentle one and the group was large so the rests at the many stiles we came across were plentiful. On return to the pub, we met Peter returning from rugby watching at the Angel and after a brief chat about Super Twelve Rugby Sue and I had a splendid lunch.

On the Sunday Jamie and I had planned an early start to Silverstone to attend the Classic Racing Day. However, my mobile rang at 1am and it turned out that we had an earlier tremendous downpour (I slept through it) and Jamie had been woken up by water pouring through the light fitting ion his bedroom. After advising that he switched off the electricity, put a bucket under the leak and sleep in the lounge I returned to sleep. We discovered later that the centre of Harborough had been flooded and many of the shops had been inundated, yet the river had hardly risen a few centimetres. I drove around to his Flat for 8am to inspect the damage and surprisingly things had already started to dry out. It was around 10.30 by the time we were on the road heading for our day out. 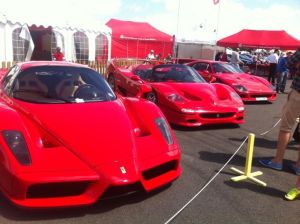 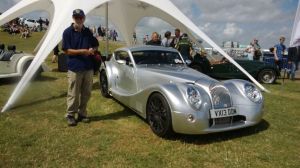 We were passed by many Supercars on our journey, all no doubt with the same destination. As we parked the car you could hear a tremendous roar from a race that was going on. On entry to the circuit we watched the end of that race, I was impressed with speed that the vintage racing cars were achieving but later on when the last generation of F1’s raced, the acceleration was awesome. During the afternoon we were treated to parade around the circuit of over 1000 Porches, every model ever made in their dozens. Every spare bit of ground had been taken up by vintage and modern sports cars all sorted out into their makes, models and age as well as the usual food and merchandise outlets (all very expensive). Most cars on display were valued at the £100 000’s and many over a million, many I had never heard of let alone seen before. Luckily I had Jamie with me, all I had to do was point and ask and I would get the make, model, value any good or bad points, whether he would like to own one and whether it would suit me or not. Not being a car buff I can see how mesmerizing they can be (if you have the cash). At £5.50 a burger I am content to look and see my reflection in the bodywork and feel smug that the speed limit is 70mph for all. It was a an excellent day with one highlight being an aerial display by a couple of Spitfires who demonstrated how we had kept the Germans from our shores over nearly 70 years ago. We watched from in front of the BMW stand.

That week, Sue, Charlotte and Sarah went into town for afternoon tea while I looked after Lucas and Ellis. I and the boys played some lovely games of sort the potatoes into sacks, find and pick the peas, hunt the strawberries and collect the fallen apples (all classic games guaranteeing fun). After thoroughly exhausting ourselves at this, we went around to Nan’s to give her some of the tiny potatoes we had collected. On return we found the women drinking tea in the lounge and chatting away.

The following day was Ellis’s 3rd birthday. After the previous day been another one of the hottest days of the year, luck would have it that it would rain. Plans had been for a pool party with some of his friends with hot dogs, garden games and a doggy bag.This was changed to Mini-Mischiefs play center in Harborough followed by hot dogs and pass the parcel on our kitchen floor. After the guests had left, Sarah collected Nan and Jamie arrived to continue the family celebration of Ellis’s 3rd birthday. 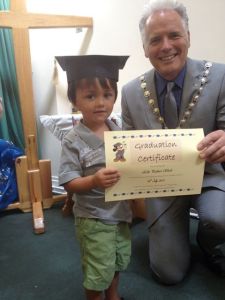 On the evening that Prince George was born, Sue, Sarah and I got on our bikes and cycled to Lubenham. The village was celebrating the birth with a lighting of the Millennium Beacon on top of the hill, with a fireworks display and food and drinks. As it had been advertised all day on radio Harborough I expected quite a large crowd, but in reality there was around a couple of dozen villagers and that was about it. The fire works were good and we enjoyed the free Sangria and nibbles before cycling back. 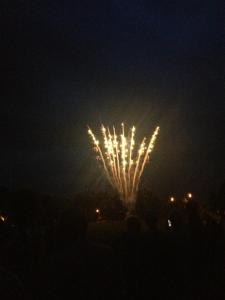 On Friday, Jamie went on a caravan holiday to Dungeness with a large group of like-minded friends. He said he was looking forward to evenings of drinking cider and talking about cars. On Monday, we and the Rothwells (less Suraj who has to work) will be travelling to Skegness to also stay in a caravan for a couple of days. The caravan is owned by Lee’s parent’s and they have kindly let us have it at the family rate. Though the weather forecast is not good, we are British, made of stern stuff and will enjoy ourselves. Lee came down to stay on Saturday and brought the keys.

All this fine weather has meant that I have spent quite a lot of time outside either in the garden, allotments or on maintenance chores. Eight rows of potatoes have been dug up and placed in sacks. Around half the onions have been picked dried and stored. All the broad beans have been picked and frozen. The rest of the vegetables and fruit are in the process of being picked, eaten or frozen. The weeds have surprisingly been very slow to grow this year (lack of water), but the recent rainstorms have ensured that they are again making an appearance. One stroke of luck was when I went onto the roof of the garage and discovered the hole that was causing the leak and prompted me to get quotes for a roof replacement. After repairing it (and a few others I found) I repainted the whole roof with silver reflective paint. That evening we had a thunderstorm and not a drop appeared inside the garage. However, that night we did have water come through on the landing. So, the other day I went up onto the house roof repaired a few small cracks I could see and also repainted that with reflective paint. We now wait and see. 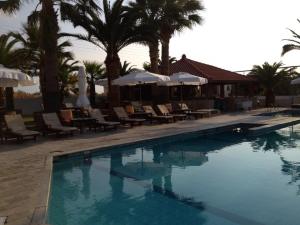 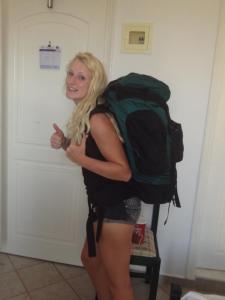