Way back in June 2007 my nephew Simon Wadsworth inspired me to begin a family blog. As many do after leaving University and before starting a life of work and sensibility, he was back-packing his way around the world. As a way of communicating with friends and relatives he wrote a blog. It was through reading about his many adventures, both highlights and mishaps, that I felt I could share in his experiences (from the safety and comfort of my study). After a good read I would often end up thinking, ‘I would love to do that’ or occasionally ‘I wouldn’t have done that.’ My blog was a resolve to keep the family abreast of what each of us have been up to, which has led to me sitting down in front of a computer at infrequent intervals and tapping on a keyboard. Much of what I write is gleaned from our Friday Curry night family meetings, but I also delve into Facebook and I try (often failing) to make a note on my online calendar of family happenings. Fortunately, when I miss something out or just plain get it wrong, there is always the facility to quietly apologise and edit. Well, after another 6 years of settling down to the routine of work, Simon has resigned his job, shouldered his back-pack again and flown off to China. You can read about Simon’s fascinating journey of discovery here: Simon’s journey

Since returning from our drug-run to Southend, the weather has perked up quite a bit and fingers crossed, we may have the start of spring. Annoyingly, the garden seems to be de-nuded of tulips. I suspect that the culprit may well be a hungry fox with a taste for exotic flavoured bulbs. I checked google and it doesn’t appear there are many foxes that have this ‘tulip’ tooth. But, I have little holes where all my nice bright red tulipa should be!  What ever it is doing the ‘deed’, it knows that my daffodil bulbs will poison it, so I still have all of them. Thank-you!!!

On Monday morning I had a blood test ( re-scheduled from March) before later on taking Nan for a blood test  and her monthly Diabetes check. Sue went for lunch with Lynne Keane.

On Tuesday, after having lunch with Nan, Charlotte came over with the boys. I looked after the youngsters while the women of the family went into town to buy a pair of slippers (took 3 hours). The men of the family went on an ant hunt in the sun lounge, during the time it took to NOT chose a pair of slippers we hunted down and incarcerated 22 deadly and dangerous ants in as many plastic cups. They were then placed in an ant farm that Sarah had made up from a commercial kit. 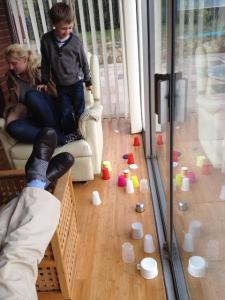 On Wednesday Charlotte and Suraj went to Fawsley Hall (overnight) for a bit of pampering. Sue, Sarah and I looked after Lucas and Ellis. During the day, Sarah and Sue took them to a play park in Corby while I mowed the lawns (first cut), dug over the small vegetable patch, hoovered the pool out and chopped a pile of wood. They returned early as Ellis had thrown up in Sue’s car. Sarah then took Lucas for a bike ride and I looked after Ellis who didn’t want to do much. They were both fast asleep in bed that night for 8pm. At 2am Sarah brought a crying Ellis into our bed, thankfully he soon settled down. At 5 am my neck suddenly got very warm and wet. Thoughtfully, Ellis had not chosen to release the entire contents of his stomach during the afternoon, he had waited to do that on my pillow! Sue and I were a bit tired when the sun came up, but Ellis slept well.

At 9 pm last Thursday, we had a surprise visitor. Lee arrived to see Sarah. He stayed around half an hour (he had brought a friend along for company) and then drove back to Nottingham. I suppose he must be quite keen on our little girl.

Friday was Thai night. Green and red curries with fish cakes. Everyone seemed fit and healthy, even Ellis kept his food to himself.

Saturday saw Sarah drive up to Nottingham to stay at Lee’s parent’s until Monday, when she had to  return to Uni’. I attended a Rugby Club re-union lunch. Past players from the Kibworth RUFC days met up and enjoyed each others company. The food was excellent, the 1st Team game against Vipers was also first-class, even though there was torrential rain during the second half. That evening we entertained Jim and Bridget, we sank a couple of bottles of wine and watched the video I had made of our Brazil foray.

The following Monday was a warm day. After getting the results of my blood test (normal) I went to the allotments and celebrated by planting onions. I had already started tomatoes in the propagator and sown lettuce etc. in pots in the greenhouse. As the weather improves I feel the sap starting to rise!

Earlier on in the week I had discovered that the husband of a past colleague at school had passed away. Like me, he was keen on his bike and I would often see him pedaling his way around the town, though I must confess that the last few times I saw him he did look very unsteady and cycled rather erratically. Sue and I will be attending the church service this coming Friday.

Yesterday, Nan gave me the news that my cousin Thelma (named after Nan and a year younger than me) had been found on the kitchen floor by a friend and had been rushed into hospital. She had previously been to see the doctor because she had caught a nasty chest bug  and was having difficulty breathing. She was laced onto a life-support machine. That evening the family had an awful decision to make. After being switched off, Thelma passed away some 6 hours later. She has 4 sons. I haven’t seen Thelma for many years, my memories of her are of happy times playing around the lake up on Brymbo Mountain as youngsters with the rest of the (quite large ) Prydderch family. She was the eldest in the family, and will be sadly missed. 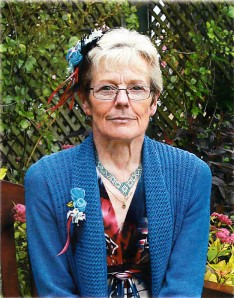