On a slightly warmer day than recent, Sue and I met Sarah, Alice and Mia in Fosse Meadows Country Park. Taking advantage of the present Covid restriction rules permitting us to meet with one other person (babies and dogs not counting) for exercise, we spent the morning wandering around this young and predominately broad-leafed, wooded part of Leicestershire.

Planning to meet at 10 am, we both arrived ‘on-the-dot’, parking up next to each other in the overflow car park. Though none of its three-car parks was full, they were busy enough to provide custom for a small catering van sited near to the start of several trails through the woodland and its main entrance. We opted first to discover an area around a small artificial lake and investigate a couple of its hides set back from the water’s edge, disappointingly there was no waterfowl to be seen. Moving on and following a well-trodden and very muddy outer trail skirting the edge of the wood, we diverted briefly to track down a Geocache (found by Sarah) located intriguingly underground next to a post and unearthed by way of a convenient stick. 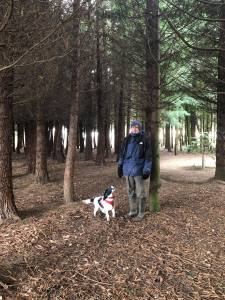 We stuck to the outer edge of the woodland until around halfway the mud became too precarious to walk safely on and we ventured into the much drier underfoot conditions beneath the tree canopy. However, this was just a minor respite as our path next led us towards a small meandering stream that ran through a lush meadow and even boggier conditions. Eventually finding a route across this near swamp without any mishap, we arrived back at our vehicles. The morning turned out to be pleasant, but a slippy stroll through a part of the county that neither of us had visited before, it is well worth another visit when conditions are warmer and drier. As a Covid restricted clan meeting, it was a resounding success and will be repeated (if allowed).

12/01/20 UK deaths: 1243. Current Market Harborough infections: 449. DOWN from last week 68. HSBC has issued a warning to customers as retailers step up safety measures. The lender – which also owns First Direct and Marks & Spencer bank – said customers who refuse to wear face masks at branches could forfeit their bank account. 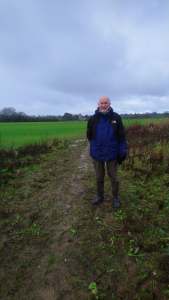 The day started dull and drizzly and ended in bright sun and blue skies. We had planned on a 6-mile walk near Uppingham, but after an overnight tightening of restrictions on exercise by the government, we changed plans and opted for a 6-mile walk starting from home. The route chosen was one which I regularly follow with my ‘part-time’ dogs (usually with a stop at the Coach and Horses for refreshment), but alas, such a delight has been denied from us by Mr Corona-virus.

It had rained heavily overnight and the underfoot conditions were as difficult as expected. Like myself, Sue had opted to wear her new ‘Town & Country’ wellies, thus saving her the task of drying out sodden walking boots by the fire during the evening. A  highlight of our tramp was discovering an occupied badger sett, we spent some time checking out the claw marks of its inhabitants at several of the entrances, we wondered whether they may be relatives of the ones we feed nightly at home. Another stop was in Marston Trussell’s, St. Nicholas’s cemetery to read the gravestones, I pointed one out to Sue that I had discovered on an earlier foray, it was Anne White’s (1665), who was taken by the great plague. We paused again for Sue to read an information board at the entrance to the church describing the slaughter of some escaping Royalist troops by the Parliamentarians in the adjacent field. The homeward leg of our trek took us past Thorpe Lubenham Hall then along the old railway line into Harborough.

During the evening we had great pleasure in researching the history of the Hall and its past occupants, discovering an internet article by the Harborough Historical Society which had been written by the present owner; A History of Thorpe Lubenham Hall by Sir Bruce MacPhail. The original manor house which predates 1296 is reported to have stood on the island in the moat and has passed through many owners since. Of its many notable occupants have been the Romanovs, our present Queen and the racehorse Brown Jack whose claim to fame was winning the Queen Alexandra Stakes – the longest race in the flat racing calendar – for six years running, from 1929 to 1934.

13/01/20 UK deaths: 1564. Current Market Harborough infections: 517. DOWN from last week 64. The UK has had the highest daily figure for deaths since the pandemic began. UK vaccinates more people than rest of EU. 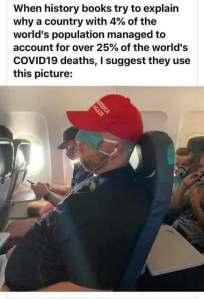 Rant: After Vice-President Mike Pence refused to invoke the 25th Amendment, the US House of Representatives in voting to impeach President Trump. Maybe die-hard Republicans cannot understand or believe that Trump lost the November election, yet much of the rest of the world cannot understand how 70 million Americans have been duped into thinking that the Trumps have been ‘Great’ for their nation. As so few Americans possess a passport and are the result of an insular education system that rejects innovation and is constricted by a rigid testing regime, it is not surprising that so many do not question or have even weighed the arguments set before them over the past four years. In their defence, the world beyond the  52 states has looked on in bewilderment, crossed its fingers and run shy of Donald. During the reign of this wannabe despot, the internet has been awash with jibes over the antics of his administration and this has reflected badly and undeservedly over the 74 million Americans that chose to end the madness. The humour in the two inset cartoons would be spectacularly funny if they weren’t true!

14/01/20 UK deaths: 1248. Current Market Harborough infections: 438. DOWN from last week 65. Travel to the UK from all of South America as well as Portugal, Panama and Cape Verde will be banned from 4 am on Friday because of concerns over the Brazilian variant of coronavirus. A fourth Covid vaccine Valneva is undergoing a trial in the UK as the government orders 60 million doses.

Trump was impeached on Wednesday by the House of Representatives over the deadly Capitol siege, the only president in US history twice impeached. Shame on Vice President Pence for not standing up and being counted.

On a day where it rained all day and the River Welland flooded, Alice had a tea party with her lock-down friends. 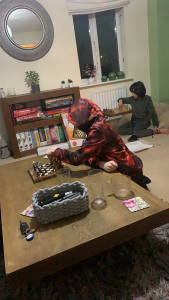 15/01/20 UK deaths: 1280. Current Market Harborough infections: 490. DOWN from last week 118. The UK shuts travel corridors and requires negative Covid tests to enter, all international arrivals to be forced to quarantine as well as demonstrate they have had a negative Covid test.

17/01/20 UK deaths: 671. Current Market Harborough infections: 426. DOWN from last week 82. The government announces all UK adults to be offered a corona-virus vaccine by September.

There is a “very serious” risk of violence at Joe Biden’s inauguration, Donald Trump’s former FBI director has warned. For certain, in the eyes of the world, Trump’s America has seemingly lost any shred of dignity, whether it can be regained will depend on the Republican party and their commitment to a peaceful transition of power.  Hopefully, the inauguration of the 46th president of the United States on Wednesday, January 20, 2021, will not go down in history as a day of shame. 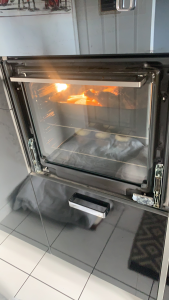 In Rothwell, whilst cooking Sunday lunch, Charlotte’s Smeg outer oven glass door decided to fail and exploded across the kitchen, scattering shards of glass everywhere! Thankfully, dinner wasn’t spoiled and no harm was done, it just remains to be found whether the warranty covers the fault. In Newbold Verdon, Alice enjoyed her Sunday lunch wearing a very smart and comprehensive bib.